My department chair at the college where I teach, organized a book talk and book signing for me. Now isn’t that a Good Story? She sent out flyers, email announcements, put the flyer on the TV screen in the buildings on campus, and put a notice on the opening page of our “inside” website. She also ordered the books and asked for student help with them. I was afraid that after everything she planned, no one would show up. I was also afraid that I would be in that big auditorium talking to myself with a hand-held mic.

That’s not what happened. About twelve people showed up. It was one of the nicest talks I have given, so far. The students and other professors asked many questions and made comments. I got into talking about my novel. I related the themes that I had heard others say about the novel, talked about how I came about creating my characters, and those who had already read the novel asked questions about how I came up with the plot. At the end, my department chair commented on how nice the talk and signing was and announced that she would like to do it again, but in the spring. Now that’s A Good Story. Don’t we all Love a Good Story?

Here’s another Good Story. Blessings and Curses was in the Top Ten Popular Titles in the Frankfurt International Book Fair.  Now, isn’t that a Good Story, and don’t we all Love a Good Story? 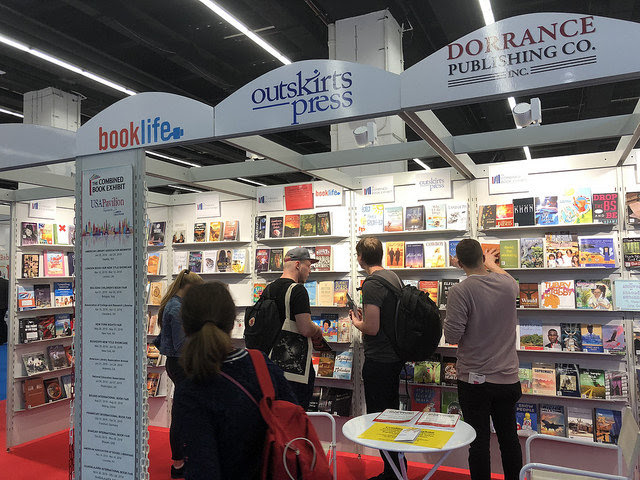 This is one of the many sections for publishers who had space at the fair for their authors.  There were so many good books. I am so grateful that my book was in the top ten popular books.  Don’t you just Love a Good Story?